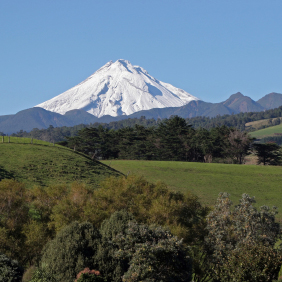 The scenery on offer in New Zealand is truly unsurpassed. In fact it is unlike anywhere else in this world. The mountains of New Zealand are no exception, with many of them among the most scenic one would experience in a lifetime.

While this list is not comprised of the country's tallest mountains, it is made up of its most beautiful ones!

Aoraki is New Zealand's highest mountain and is positioned in the Southern Alps of the South Island. The mountain is situated within the National Park of the same name, which actually forms one of UNESCO World Heritage Sites.

Mount Cook is not only visually appealing, but it is also a popular mountain for climbing, with climbers from all over the world travelling here to attempt the 3,754 metre summit.

Mount Tasman is New Zealand's second highest mountain and stands at a height of 3497 metres. This great white mountain is covered entirely in ice, while its surrounding Valleys are full of spectacular glaciers, that are shadowed by further majestic mountain ranges.

Mount Tasman is also popular with climbers; however this climb is a little more challenging than the Mount Cook hike.

Set within the awe-inspiring Mount Aspiring National Park, this gorgeous mountain is one of the country's tallest, while also being one of its loveliest. This classic horned peak is extremely popular for climbing, while the surrounding landscapes also offer a pleasant backdrop during the climb.

Regarded as New Zealand's largest ski area, Mount Ruapehu is home to the most awesome natural skiing and snowboarding terrain in the country.

The mountain itself is one of the world's most active volcanoes, with warnings still occurring as recent as 2008. Nestled in a rugged landscape, the surrounding scenery will captivate the hearts and imaginations of anyone who visits.

Situated on the West Coast of New Zealand's North Island and is one of the most symmetrical volcanic cones in the world. It also sits in the centre of the region, making it easily accessible from all the regions major towns.

Taranaki is ideally positioned close to the coast and is virtually surrounded by green fields and rugged scenery. This destination is perfect for a relaxed weekend away.

Easily one of New Zealand's most photographed mountains, Mitre Peak can be found close to the shore of Milford Sound. While it may not be one of the country's tallest peaks, it is one of the greatest.

The peak was named after its resemblance to the shape of the bishop's mitre or head-dress, particularly if viewed from the south. Taking a tour of the sounds will allow you to enjoy the spectacle of this magnificent peak, so be sure to book ahead and bring the camera along.

Mount Hutt covers 900 acres of skiable terrain that is suitable for all levels of skiers. In fact the mountain is popular for all snow sports, from snowboarding and tubing, to skiing and tobogganing.

The mountain is truly beautiful and the surrounding terrain is sure to please nature lovers and adrenaline seekers alike.

'We would love to help you with your holiday.'